The word “modern” has been used as an adjective for many things throughout history. The word is derived from Latin and dates back to the 16th century. This means that for five centuries, people have been describing new concepts as “modern.”

There’s been phrases like “modern music,” “modern art,” and “modern style” thrown around since the inception of this word. So, how do we define things that are “modern” and when does something stop being “modern”? Perhaps, that is why one may think there is not a consensus on what “modern architecture” truly consists of.

MODERN BUILDING MATERIALS
When taking into account what has changed in architecture over the years, one of the most obvious answers is building materials. The advent of manufactured steel and durable glass has revolutionized how structures are built and look. One has to look no further than a skyscraper to see an example of how drastically different buildings look from a century ago. While steel was originally used to establish the internal structure, it has become more evident in exteriors with exposed steel-framed buildings, and thus a newer element of modern architecture. Glass, which was first used just for windows, now makes up the entire façade in many modern buildings and allows for another element of modern design, which is natural light.

OPEN SPACE
Anyone who has ever stayed in an old hotel or watched a game in an old stadium can tell you that modern architecture embraces the idea of open space as opposed to the buildings of the past. Functionality and efficiency still play large roles in the designs of modern buildings, however, many architects now allow for expansive open areas. This trend is most evident in office buildings, where open floor plans have become the preferred layout.

MINIMALIST DESIGN
The level of detail in modern design is incredibly simple compared to almost every other era of architecture. Whether it be the Romans, Greeks, or even 20th Century American architecture, intricate designs dominated not only the exteriors of buildings, but the interiors as well. The adverse is true for modern architecture which boasts simple designs of both.

CLEAN LINES
Bold and simplistic geometric shapes have become the calling card of modern architecture, especially for the exteriors of modern buildings. These buildings feature obvious inspiration from the Art Deco movement which began in the mid-1920’s. Basic flat roofs and clean angles are drawn from classic mid-century modern looks made famous by architects like Walter Gropius, Ludwig Mies van der Rohe, and Frank Lloyd Wright. 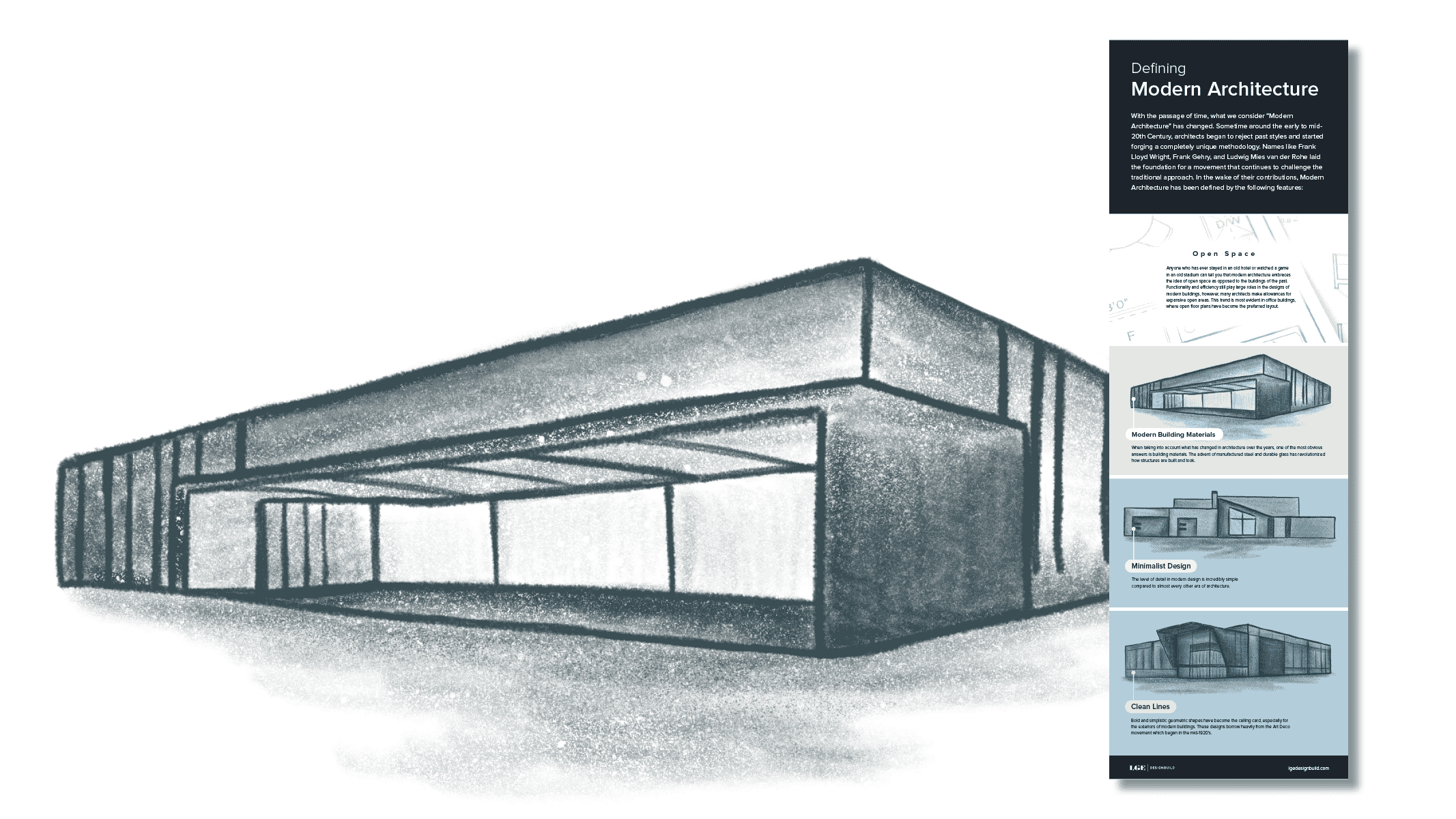