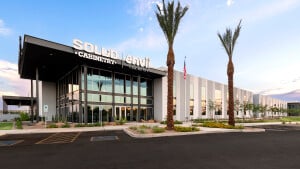 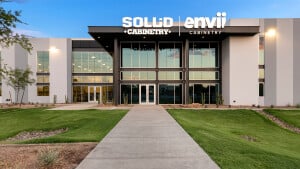 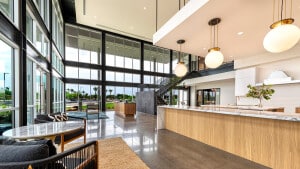 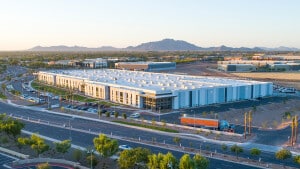 SOLLiD Cabinetry, located at 2615 E Germann Road, is situated on 17 acres of land at the corner of Gilbert and Germann Roads. LGE Design Group served as the architect and interior designer. There is approximately six acres under roof that houses manufacturing equipment imported from around the world. The facility also features 50,000 square feet of Class A office space, an expansive two-story lobby with lush finishes including a solid walnut reception desk and fluted marble backwall.

All cabinetry in the facility was provided by SOLLiD to further exhibit their capabilities and product line. The idea was to extend their showroom throughout the office areas. What you can’t see, but is equally impressive, is the dust control system from Germany which is roughly 4,600 square feet, enclosed in its own yard with two-story structural steel and a perforated metal skin to screen the system.

“LGE handled the rezoning, design and construction all in-house. The process was so simple and easy. I would highly recommend them.”

“Not weeks, but months ahead of schedule! That is what I call warp-speed execution! And flawless as well.”

“LGE provided a great experience for our team from start to finish. We couldn't have asked for a more professional group to work with.”